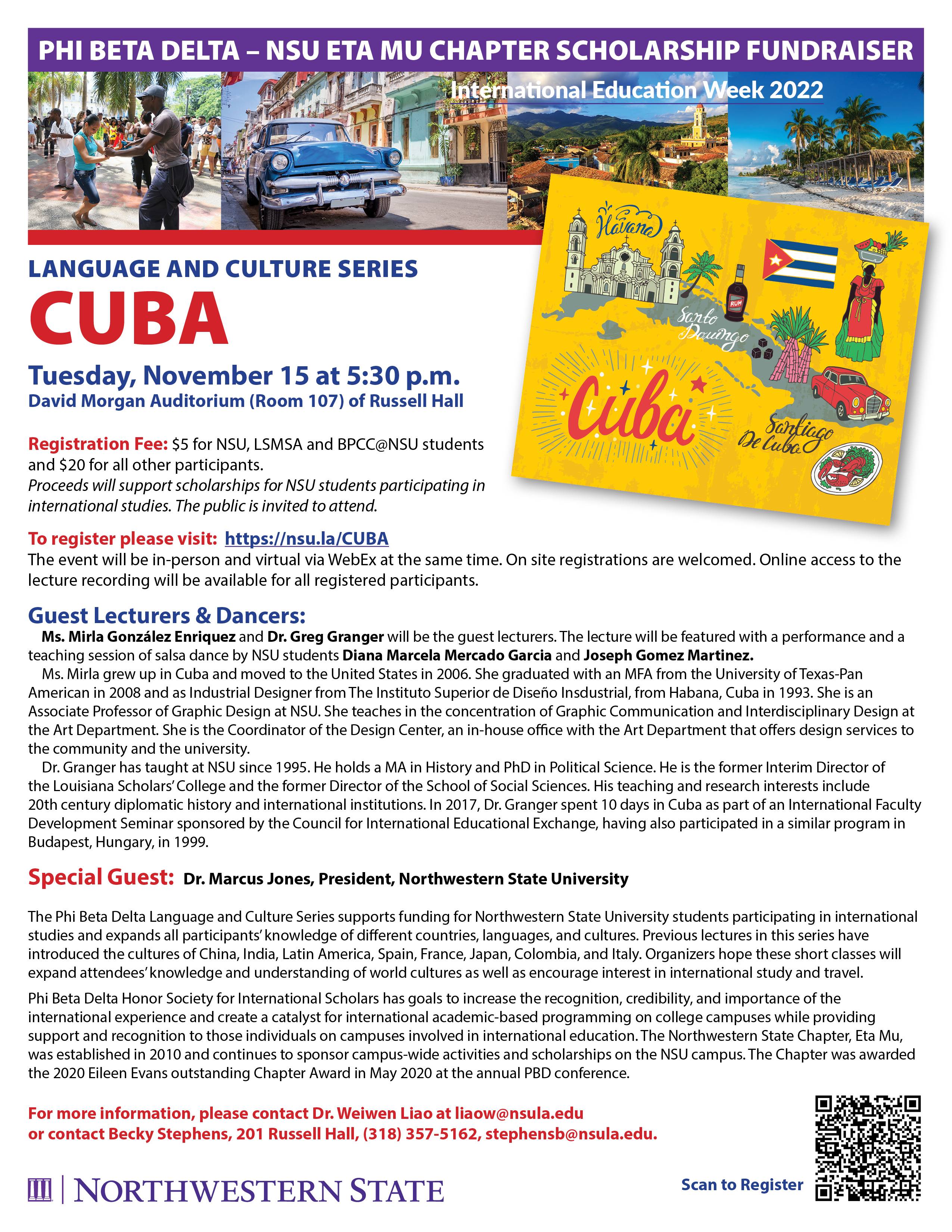 Northwestern State University’s chapter of Phi Beta Delta Honor Society for International Scholars will host a Language and Culture mini-lecture “Cuba” on Tuesday, November 15 at 5:30 p.m. in the David Morgan Auditorium (Room 107) of Russell Hall. The event is being held during International Education Week 2022.

The registration fee is $5 for NSU, LSMSA and BPCC@NSU students and $20 for all other participants. Proceeds will support scholarships for NSU students participating in international studies. The public is invited to attend. To register please visit https://pbd-lecture-cuba.eventbrite.com. The event will be in-person and virtual via WebEx at the same time. On site registrations are welcomed. Online access to the lecture recording will be available for all registered participants. Mirla González Enriquez and Dr. Greg Granger will be the guest lecturers. The lecture will be featured with a performance and a teaching session of Salsa dance by NSU students Diana Marcela Mercado Garcia and Joseph Gomez Martinez. NSU President Dr. Marcus Jones will be the special guest for the event.

Enriquez grew up in Cuba and moved to the United States in 2006. She graduated with an MFA from the University of Texas-Pan American in 2008. She graduated as an industrial designer from The Instituto Superior de Diseño Industrial in Havana, Cuba, in 1993. She is an associate professor of graphic design at NSU. She teaches in the areas of graphic communication and interdisciplinary design at the Department of Fine + Graphic Arts. She is coordinator of the Design Center, an in-house office with the department that offers design services to the community and the university.

Granger has taught at NSU since 1995. He holds a M.A. in History and Ph.D. in Political Science. He is the former interim director of the Louisiana Scholars’ College and the former director of the School of Social Sciences. His teaching and research interests include 20th century diplomatic history and international institutions. In 2017, Granger spent 10 days in Cuba as part of an International Faculty Development Seminar sponsored by the Council for International Educational Exchange, having also participated in a similar program in Budapest, Hungary, in 1999.

The Phi Beta Delta Honor Society for International Scholars has goals to increase the recognition, credibility, and importance of the international experience and create a catalyst for international academic-based programming on college campuses while providing support and recognition to those individuals on campuses involved in international education. The Northwestern State Chapter, Eta Mu, was established in 2010 and continues to sponsor campus-wide activities and scholarships on the NSU campus. The Chapter was awarded the 2020 Eileen Evans outstanding Chapter Award in May 2020 at the annual PBD conference. For more information, please contact Dr. Weiwen Liao at liaow@nsula.edu or Becky Stephens, 201 Russell Hall, (318) 357-5162 or stephensb@nsula.edu.