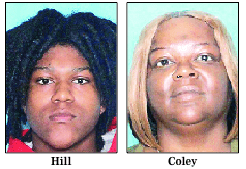 The Natchitoches Police Department has identified Jashawn Hill and Evelyn Coley as additional suspects in the shooting that occurred Nov. 22.

On Nov. 22,around 12:40 p.m., officers with the Natchitoches Police Department responded to the 400 block of Lakeview Drive in reference to gunshots in the area. Officers spoke with several witnesses who said that occupants of two vehicles began shooting towards people at the apartment complex.

As a result of their investigation, Dymond Johnson, (B/F, 22 y.o.a. of Natchitoches) was arrested for five counts of principal to attempted second degree murder and was placed in the Natchitoches Parish Detention Center.

Tips remain confidential and the caller can receive a cash reward up to $2,000 for the arrest of an offender.

Two get federal prison terms for illegal possession of firearms