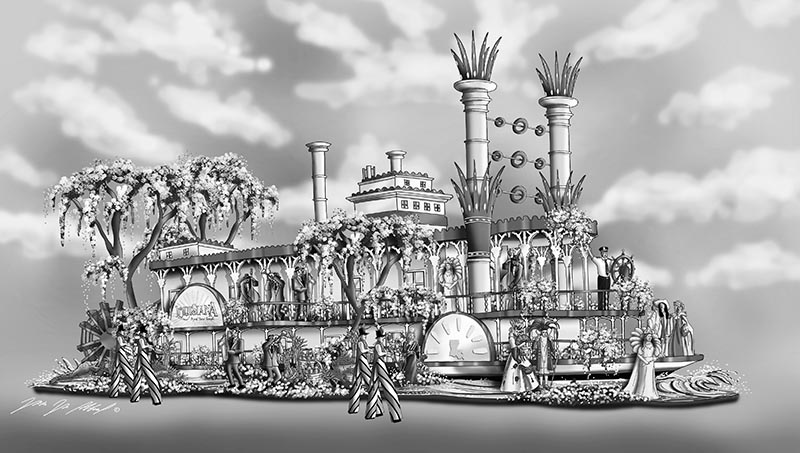 The festival season is winding down in Natchitoches but for Emma Rose Giddens the Christmas celebration extends into the new year.

As Miss Merry Christmas, Giddens is one of a handful of Louisiana luminaries selected to represent the state in the annual Rose Parade Jan. 2 in Pasadena, Calif. She considers public events such as the Tournament of Roses an opportunity to share the things she loves with the rest of the world. “Being Miss Merry Christmas provides me with a platform to share my love for Natchitoches and God with others,” she says. “I think it’s going to be great to bring more awareness and tourism to Natchitoches through this platform because I’ve lived in Natchitoches all my life and I love it here.”

Giddens is no stranger to spreading a positive message during her travels. Before competing for the role of Miss Merry Christmas, she volunteered on mission trips around Arkansas and as far away as Belize.  “I was able to go into communities that maybe don’t have as much as my community does,” she says. “I was able to just give back, and share the word of God, and let them know that they’re cared for and that they’re loved.”

The theme of this year’s Rose Parade is “Turning the Corner,” which Giddens says resonates with her personally. “I think that I am turning the corner as well in my life,” she says. Finishing high school at Natchitoches Central and entering college in the fall is going to be a big change for me, but I am super excited.” She says her future plans are to study biology at Louisiana Tech to become an immunologist specializing in allergies. She explains her motivation. “From zero to five, I had a milk allergy and now for about two and a half years, I have had food pollen allergy syndrome, which basically, I am allergic to all fresh fruits and vegetables,” she says. “I’m not the only one struggling with this. I want to be able to help people. I want to be able change the outlook. There maybe could be a cure one day.”

For now, Giddens’ role representing the City of Lights has helped her develop a renewed appreciation for home. “Traveling throughout the state has allowed me to see other cities and shown me just how unique and special Natchitoches is,” she says. As she looks forward to her first official trip out of state, she explains she’ll help decorate Louisiana’s float ahead of her parade appearance. “(The floats are) all created from natural materials, so it’s all fresh flowers and seeds,” she says. “They have given us the opportunity to come and volunteer and help.”

Giddens national appearances as Miss Merry Christmas doesn’t end with the Rose Parade. She’ll also attend the 2023 Mystick Krewe of Louisianians Mardi Gras ball in Washington, D.C., in late January. With thousand in attendance, Giddens will be recognized as an ambassador for the City of Lights. She explains what sets Natchitoches apart, “People help people, everyone is supportive and even though it’s small we have many great aspects that bring people here such as the Christmas Festival,” she says.  “I’m really honored to be able to represent Natchitoches and be a role model.”

The parade will be broadcast live at 8 a.m. PST on ABC and NBC affiliated networks. Check your local listings for exact times.

US. Rep. Johnson selected to serve as Deputy Whip in 118th Congress