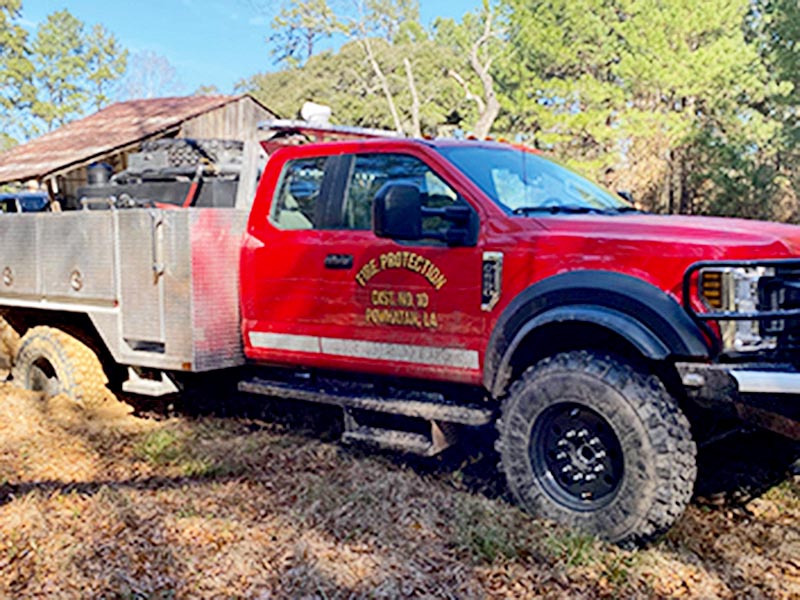 Natchitoches Parish Sheriff’s Detectives continue to investigate the theft of a fire truck stolen at Fire District  #10 in Powhatan Wednesday night. The truck was recovered  Thursday afternoon off LA Hwy. 3191 near Natchitoches, however, the suspect or suspects remain at large.

On Wednesday, Jan. 18, around 7:35 p.m. deputies responded to a reported burglary at the District #10 Fire Department located in the 100 block of La. Hwy 485 in Powhatan.

Forced entry through a door into the fire department was apparently  used to steal a red 2019 Ford F-550 brush fire truck valued at $204,000.

The stolen vehicle was entered into the National Crime Information Center Additionally, a  social media alert asking the public to be the look out for was posted. Around 2 p.m. on Thursday a social media follower contacted NPSO Chief Deputy Greg Dunn. Deputies response to the area and found the vehicle some 200 yards off the highway stuck in the  mud behind an old abandoned home.

The truck is reportedly unharmed but will need a complete clean-up. DNA and fingerprint  evidence has been processed. District #10 firefighters recovered the vehicle.

Those with information regarding the burglary and theft of the vehicle are encouraged to call the NPSO Criminal Investigations Bureau at 318/357-7830.